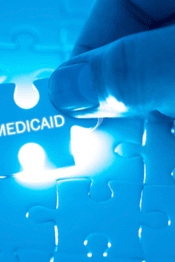 Joyce is a busy grandmother who stays healthy by watching what she eats and taking walks. She says that she smokes – and she has a harsh cough because of it – but she isn’t quite ready to quit. She has six (6) adult children whom she loves and supports.  Her 26-year-old daughter has six (6) kids under the age of 10 and they all moved in with Joyce when her daughter went through a health crisis. Two weeks after getting her COVID-19 shot, her daughter became quite ill – she couldn’t walk, couldn’t eat, became dehydrated, and was hospitalized. The doctors can’t figure out what went wrong - they aren’t sure if the vaccination caused her health problems, but Joyce has her suspicions. Her daughter was in no condition to care for her children, so she temporarily moved her family in with Joyce. Since then, Joyce has been very busy caring for them all.

Joyce says she is quite healthy but decided to apply for Medicaid when she went in to apply for Food Stamps. She thinks recertification is very easy and appreciates that DHS has a portal where she can go online to track her eligibility and keep everything up-to-date1. Joyce mentioned that she believes everything works out well with her Medicaid, but doesn’t think that will be the case if she ever decides to move. She explains that if mail gets returned to DHS, “well, then you’re screwed. You have to wait and reapply that’s kind of the trigger. But other than that, everything is pretty much easy.” Joyce mentioned it was the doctor’s office who told her that her Medicaid had been terminated when she went in for an appointment. She didn’t get anything in the mail, so now she really keeps an eye on that portal.

Joyce doesn’t really have to take any medications at this point, yet she knows the importance of having an annual check-up. Her doctor recently told her she needs to slow down her smoking. He suggested she get a patch or the nicotine gum to try to move away from her smoking habit. She’s working on it, but she isn’t ready to do that yet. Joyce has smoked for over 37 years and realizes it’s going to be tough to give it up. But she wants to be able to help care for all of her 21 grandchildren, so being healthy remains her goal.