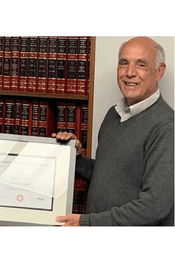 George Butler was admitted to the bar in 1977 practicing law in Fayetteville, Arkansas. He served as Deputy prosecuting attorney; private practitioner and civil attorney for Washington County over the years. He was a full time county attorney from 2000-2014 retiring at the end of 2014. He then worked briefly for Legal Aid via an Americorps grant and has volunteered for Legal Aid since that time. George has volunteered over 629 hours in the past year. When asked why he volunteers, George states “Well even when I was still practicing I would take pro bono referrals from Legal Aid. I always felt like it was my duty like many other lawyers. Since I have retired it has not only given me a chance to keep my feet wet in the practice of law but also assist Legal Aid in rendering it's invaluable service to the poor and the elderly”.