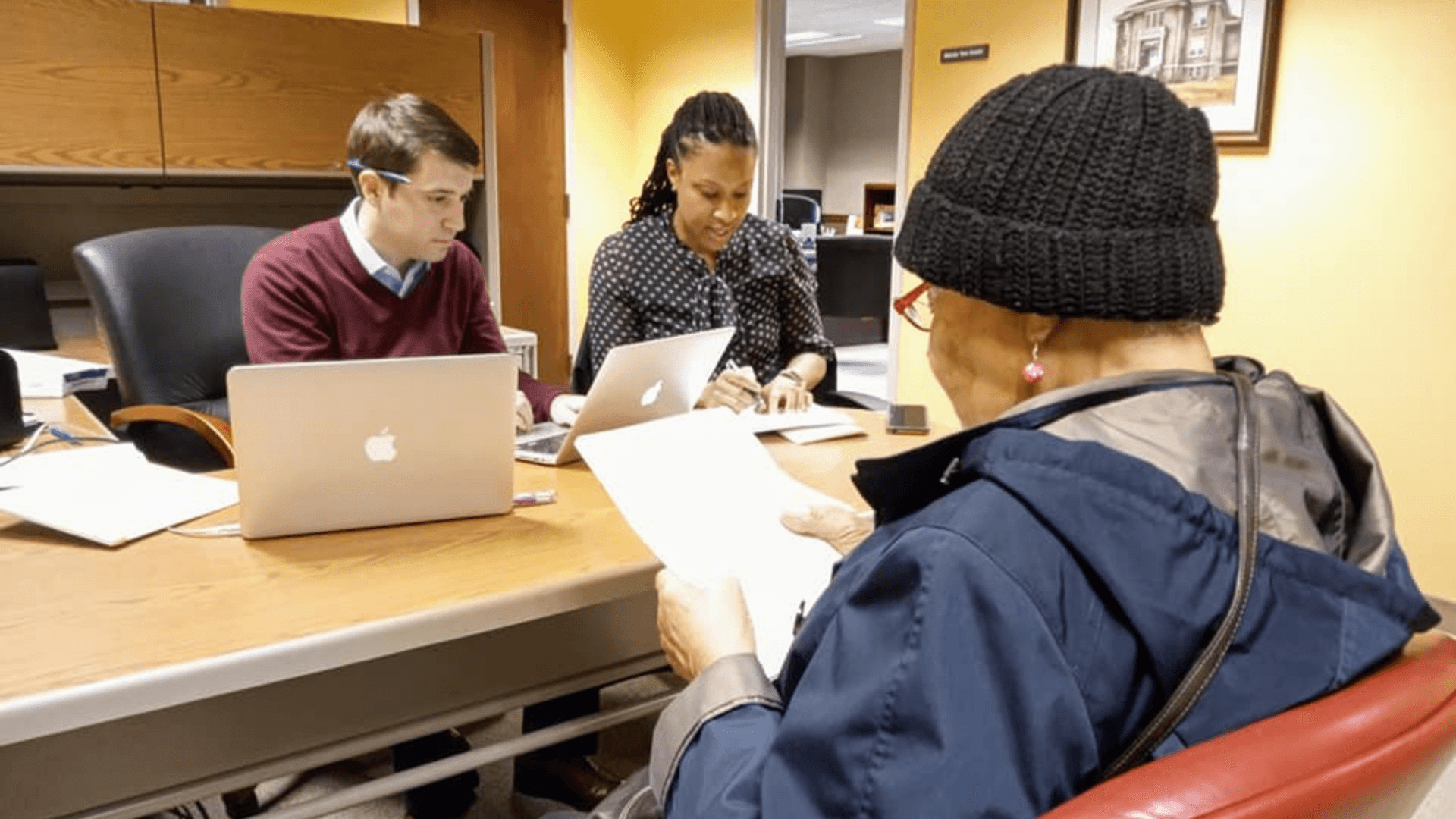 The mission of Legal Aid of Arkansas is to champion equal justice for low‐income individuals and communities and to remedy the conditions that burden and marginalize them.

Legal Aid is a 501(c) 3 nonprofit organization that provides free legal services to low-income individuals residing in the state of Arkansas in civil (non-criminal) cases. Legal Aid is headquartered in Jonesboro and serves 31 of the 75 counties in Arkansas. Legal Aid assists thousands of clients every year in priority areas, such as family law, consumer issues, bankruptcy or evictions.

Legal Aid of Arkansas is one of two nonprofit law firms funded by the Legal Services Corporation (LSC) in Arkansas, the other being the Center for Arkansas Legal Services (CALS). The organizations were formed in 2002 when six legal services providers merged.

In the United States, the first civil legal assistance program for low-income people was founded in New York City in 1876. That program would eventually become the Legal Aid Society of New York. In 1965 the federal government started a legal services program to encourage lawyers to find solutions for the causes and effects of poverty funded by the Office of Economic Opportunity (OEO). The OEO provided funding for local providers that offered full-service representation with a goal of ensuring equal access to the legal system. Each program was designed to be self-sufficient and to handle the full range of advocacy for its clients. The OEO also developed an infrastructure that provided training, support, and leadership to the local programs.

Congress created the Legal Services Corporation Act in 1974, and in 1975 LSC took over the OEO programs adopting essentially the same delivery and support system developed by the OEO. The LSC Act said its was “to continue the vital legal services program,” but it also changed the goals of the program. Congress commanded LSC to achieve two major things:

LSC expanded upon the existing program by strengthening its providers, enhancing the support structure, and expanding the reach of the program into every county.

Before federal funding for legal services became available, opportunities for poor Arkansans to find representation were limited. In the 1930s, a part-time lawyer sometimes served indigent people in Pulaski County. Elsewhere in Arkansas, it was simply up to local attorneys to decide whether to donate time or resources when a person needed representation but could not afford it.

In 1965, Arkansas got its first legal services program — the Legal Aid Bureau of Pulaski County, which received one of the first eight grants from the OEO.

In 1967, a program in Newport received federal funding to create Jackson County Legal Services Project. It was originally funded through the Crowleys Ridge Development Council, Inc., a community action program. In 1969, the directors of the project decided to incorporate. Jackson County Legal Services, Inc. was formed in 1970 as a domestic non-profit with the purpose of “…apprising the poor of their rights and remedies under the law and encourage them to assert those rights in the courts through the Legal Services Program.”

In 1977, ten years after the Jackson County Legal Services Project began, the one-attorney operation grew into a major law firm in Northeast Arkansas. The board of directors added Lawrence, Woodruff, Poinsett, and Independence Counties to its coverage area. The name changed to Legal Services of Northeast Arkansas, Inc. In 1978, the program took on Randolph County. In 1980, the coverage area grew to include Sharp, Craighead, Greene, and Clay Counties.

By 1984, satellite offices were opened and at one time, every county in the service area had an office. As technology and communications developed and funding ebbed and flowed, it was no longer necessary to have so many offices. The program reduced to one office in Newport and an additional office in Jonesboro.

Residents of Crittenden County applied for a grant from LSC to create East Arkansas Legal Services, Inc. in 1978. The program covered Crittenden, Cross, Phillips, Mississippi, Lee, Monroe, and St. Francis counties. After the first case in Crittenden County in 1978, the organization began opening branch offices to provide better access to its services to people in rural areas who lacked public transportation. The first branch office was in Forrest City. Later offices opened in Helena and Blytheville. EALS had a long history of systemic and impact litigation for clients in East Arkansas.

In 1991, the Ozark Legal Services collaborated with the Bar Associations from Baxter, Benton, Boone-Newton, Carroll, Celburne, Madison, Marion, Searcy-Van Buren, Stone, Tri-County, and Washington Counties to win the prestigious Harrison Tweed Award from the American Bar Association. The award recognized their achievement as the nation’s most outstanding pro bono project for cooperative delivery of free legal services to the poor.

Legal Aid of Arkansas & the Center for Arkansas Legal Services

The Equal Access to Justice Panel began as the Pro Bono Project of Legal Services of Northeast Arkansas in 1995. The Panel works cooperatively with local Bar Associations, the Arkansas Bar Association, and the Arkansas Trial Lawyers Association to develop and administer a pro bono private attorney/Bar involvement program in the thirty-one counties Legal Aid of Arkansas serves.  Another part of this delivery model is the Arkansas Volunteer Lawyers for the Elderly, previously a statewide program but now focused on providing individuals age 60 and above with access to a pro bono lawyer, coordinated through Legal Aid. As of 2016, 827 attorneys are signed up as volunteers for Legal Aid’s pro bono panels.

In 2002, Legal Aid of Arkansas and CALS joined forces to create the Arkansas Legal Services Partnership. The partnership, called ALSP, coordinated statewide initiatives and trainings, and utilized and created justice technologies. ALSP collaborated to launch the statewide helpline (1-800-9 LAW AID), doubling the number of clients served. The helpline is still active, but the formal partnership dissolved in 2016. The organizations continue to work together on many initiatives and projects.

In 2003, the Access to Justice Commission formed after the Arkansas Bar Association House of Delegates and the Access to Justice Working Group petitioned the Arkansas Supreme Court to create the commission. The ALSP provided staffing resources for the Commission. Also that year, the Arkansas Pro Bono Partnership, Arkansas Bar Association, and other stakeholders partnered to form the Arkansas Pro Bono Partnership Blueprint Agreement. The ALSP launched the Justice Technology Project in 2004, beginning with the creation of arlegalservices.org. The website provides legal resources for low-income Arkansans and poverty law resources for attorneys. In 2005, for the first time state funds were designated in support of legal services in Arkansas. These funds now constitute 14 percent of the total funding for legal services in Arkansas.

To learn more about the Arkansas Access to Justice Commission and Foundation, please visit www.arkansasjustice.org.