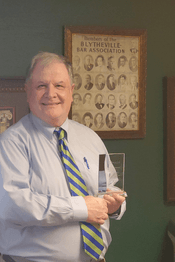 Robert L. “Bobby” Coleman has practiced law since graduating from law school in 1980 with the law firm of Reid, Burge, Prevallet & Coleman in Blytheville, Arkansas. His practice consists primarily of civil trial work and civil appeals in a wide variety of areas. He has been recognized by Mid-South Superlawyer Magazine for several years as a “Mid-South Superlawyer.” He has given seminars on legal topics for several organizations including The Arkansas Bar Association, The Arkansas Trial Lawyers Association , The Arkansas Association of Defense Counsel. He has received the Outstanding Pro Bono Lawyer Award several times for Mississippi County. Mr. Coleman received his Bachelor of Arts Degree in Political Science in 1977 and his law degree in 1980 from the University of Arkansas at Fayetteville.