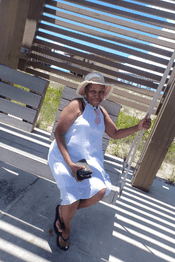 Sandra Jackson is a sixty-three-year-old former CNA.  She worked as a CNA for a company.  Due to budget cuts, her job as a CNA with the company ended shortly after the COVID-19 Pandemic started.  Sandra does private personal care for one patient on a limited basis. Sandra loves to garden and can vegetables and fruits.  She considers herself a “Country Girl”

Sandra started receiving Medicaid in January of 2022.  She is on AR Home*.  “Medicaid has been a blessing to her,” she says.  When she was working, she could not afford insurance.  Her wages did not allow her the financial capability to purchase insurance or the medications that she needed.  She was suffering from Hypertension and excruciating back pain which she attributes to her lifting patients and constantly being on her feet while caring for her patients.  She was buying over-the-counter medications for her pain and taking home remedies for her Hypertension.  She knew that she was taking a chance on using home remedies for her Hypertension, but could not afford the prescription medications.

Sandra being laid off from her job led to her applying for early Social Security benefits.  She was aware of the consequences of electing to retire early, but she desperately needed the income.  Applying for her Social Security Retirement at the age of sixty-two would leave her without medical benefits. Although she was no longer working every day, she continued to suffer from pain in her back, feet and neck. She applied for Medicaid and was approved and started receiving AR Home.  This led to her being able to finally receive her Hypertension  and pain medication.  The pain medication allows her to continue to garden which relaxes her and relives some of the financial strain of buying from the store.  Sandra says that being able to see the doctor when needed and having the medications that she needs have helped to relieve her mental stress.

For Sandra, Medicaid has allowed her to live a normal life, to visit friends and family without pain and to control her Hypertension.  Without Medicaid, she feels that her condition would have gotten worse and she would not be able to perform those activities that she considers as stress relieving.

* Note: On January 1, 2022, Arkansas Works was replaced by the Arkansas Health and Opportunity for Me program, or ARHOME. Just like with Arkansas Works, ARHOME uses Medicaid dollars to buy health care coverage for you from qualified health plans.