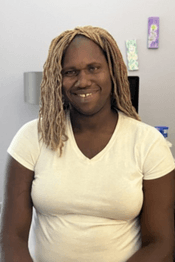 Shaquita moved from Tennessee to Arkansas approximately 4 months ago. After relocating, one of the first things she did was apply for Medicaid. Shaquita knows the importance of health insurance because she has spent much of her life in emergency rooms. She refers to herself as a “hermaphrodite” because this typically results in her having to spend less time describing the details of her condition to others, unlike when she uses the term, “intersexed”. This is because Shaquita’s condition doesn’t seem to be well understood by most of the people she meets – and that has been a struggle for her. But as far as she’s concerned it’s all the same, because what it really means in her case, is that she experiences a lot of medical problems.

Shaquita has learned that because of her condition, it is essential that she takes care of both her physical and spiritual self. Everything goes better when she tends to both, because she sometimes feels that her body is a multitude of contradictions - what makes her female doesn’t always coincide with what makes her also male. Despite Shaquita’s personal struggles, it is important for her to always remain true to herself. As a result of her self-awareness, she often needs medical treatment and ends up in the emergency room a lot. Hermaphroditism has caused her to experience issues with her circulatory and respiratory system. She struggles with breathing, gets dehydrated easily, and finding relief is very challenging because medicine works differently with her body in comparison to others. Shaquita wishes that her life was more stable, so she could have more control of her health. This is why she is so grateful for Lucie’s Place – a place for her to meet friends, have a bite to eat, and relax for a while. With Medicaid, her spirituality, and Lucie’s Place on her side, Shaquita is confident that she can access the care she needs and gain more control over her health and overall wellbeing, and to her, that’s all that really matters.