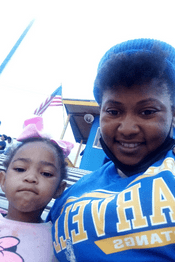 Tresia, 34, lives in Marvell, AR, and currently serves as an AmeriCorps Worker. Her daughter receives Medicaid under ARKids. *Tresia initially qualified for Medicaid because she was pregnant, continued to receive Medicaid due to the Public Health Emergency, and now she will remain eligible under AR Home thanks to Arkansas’ Medicaid Expansion. Unfortunately, Tresia lost her job during the Pandemic. However, during that time Tresia was grateful because she did not have any problems with her Medicaid. After losing her job, Tresia joined **AmeriCorps, however, she was not eligible for their insurance and only received a small stipend each month. Living off a very limited income, she is unable to afford Private Insurance, but thanks to Medicaid Tresia did not have to worry about losing medical care for herself and her daughter.

* In the state of Arkansas, in addition to many other categories, one of the ways you may be eligible for Medicaid is if you are pregnant. Arkansas has expanded its Medicaid eligibility to adults (ages 19-64) with income up to 138% of the poverty level.

** AmeriCorps offers a range of benefits ranging from living allowance to childcare assistance. However, not all AmeriCorps members are eligible to receive health insurance. (https://americorps.gov/)