Interpreters ensure everyone gets day in court in Northwest Arkansas 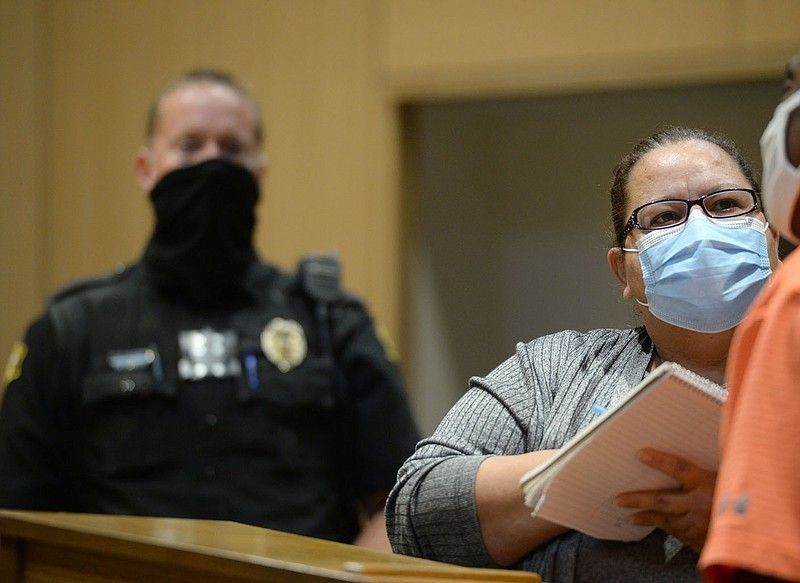 District Judge Jeff Harper claims his court is one of the most diverse in Arkansas -- or so he's been told. Harper requested interpreters for 616 cases from Jan. 1, 2020, to Aug. 31, said Jason Daniel, court interpreter services director of the state Administrative Office of the Courts.

The state office organizes the interpreter service for all Arkansas courts, providing regular in-person interpretation for Northwest Arkansas in Marshallese and Spanish and other languages via telephone or Zoom.

The circuit courts in Northwest Arkansas, which hear felony, family and civil cases along with appeals from district courts, often use interpreters as well.

Benton County Circuit Court, with 1,256 cases requiring interpreters, and the Washington County Juvenile Court with 565, topped the list for circuit courts in the region for the same time period. The district court calling for the second most interpreters was in Fort Smith at 356 interpreters.

Harper also serves as judge for the Elm Springs District Court on the first, second and third Wednesdays of the month, where he sees increasing numbers of defendants needing interpreters. He said his session Wednesday included three with Spanish interpreters.

Daniel noted in Arkansas, county juvenile court data is included in circuit court numbers in most counties. The one exception: Washington County.

"As far as Judge Harper's being the most diverse court in the state, it wouldn't surprise me," Daniel said in an email Wednesday. "It would be difficult to confirm, but if the list is any indicator, I would say, yes, most likely."

Roughly one-fifth of the state's Hispanic population -- 50,540 -- have settled in Benton County, where they account for 17.8% of the overall population, according to the 2021 U.S. census. Hispanics make up 18.2% of the Washington County community and number 44,755.

In addition to Spanish and Marshallese, the Springdale District Court requested translations in Yapese, Kosraean, Chuukese and Pohnpeian, all spoken in the Federated States of Micronesia; Kiribati, from an an independent island nation in the Pacific Ocean; Karen and Karenni, which are from a Burmese-Thai tradition, although Karenni is more closely related with Laotian; Russian; and sign language, Daniel reported.

The Springdale Police Department uses a similar service in which officers can speak through interpreters in the field through their cellphones, Chief Mike Peters said.

Harper said interpretation services help ensure defendants in his court receive due process. When a defendant pleads guilty, he gives up his right to a trial, Harper explained.

"I don't want them to give up their rights because they don't understand," he said.

Yancey said the interpreters provide everybody equal access in the court system.

"I do really enjoy making it possible for the court system to work for those whose English is limited the same way it works for you and me," Yancey said.

Harper, Daniel and Yancey all agree the courts need more interpreters. But it can be a tough job to get. The state office works with certified freelance interpreters in most common languages.

Yancey said the certification process includes proficiency tests in both English and the language to be interpreted, as well as proficiency in three types of interpretation.

"It's not enough to be fluently bilingual, to be able to carry on a conversation, to travel and order food, to get through life," Yancey said.

The certification can remove some of the doubt if a defendant said later that he didn't really understand what he was being told, Harper said. The certifications can answer questions about the ability of the interpreters.

The state of Arkansas in 1999 established the foreign language interpreter certification program, which requires judges to appoint a certified interpreter from the state office's list.

The National Center for State Courts does have a certification test for Marshallese but has no one to score it, Davis continued. "For many languages, there's not even a test," he said. "Each state has to make allowances."

Instead of certification, Davis is "registered" with the state.

Daniel said this means they have passed all the other requirements up to the certification test -- and the court administration office helps with training when able.

"We really wish things were different," Davis continued. "But no one from the Marshallese community has stepped up."

Certified interpreters are promised a one-hour minimum of work, for which they are paid $75, according to a state compensation policy for the position, Daniel said. Additional hours are $50 an hour, charged at 15-minute intervals.

Interpreters are paid and budgeted through the state office, Harper said. Interpreter fees are never included in court costs paid by defendants found guilty, he said.

"For the same reason that we would want to hire an attorney, somebody who has been to law school and knows the court system," Yancey said. "If the rest of us were to give legal advice, it would be pretty dicey."

For example, lawyers and court officials speak in a more formal manner, using legal and Latin terms, which interpreters must understand, Yancey explained.

The interpreters also might need to translate difficult medical terminology, as well as specific language about DNA, ballistics, sexual assault and much more.

"Even construction has its own terms," she said. "If it's a civil suit, and a homeowner sues a contractor for shoddy work or because they didn't get everything they paid for, the interpreter needs to understand terms like pocket doors, crown moulding and soffit."

Harper said when Hispanics and Marshallese began moving into Northwest Arkansas about 20 years ago, "we had kids translating, or their bosses, and you had no idea what they were telling them."

"They could have their children, their cousin, their minister's wife, people who weren't always impartial about the outcome."

Interpreters aren't allowed to give legal advice, Yancey said. Nor can they just repeat word for word.

Yancey interprets for Spanish speakers and noted word order is structured differently in English and Spanish.

The interpreter also might translate part of the interrogation or examination, which requires simply echoing -- and never in the third person -- questions asked by officials and answers given by defendants, Yancey continued.

The interpreter's tone must represent the speaker's -- sounding flippant, frustrated, remorseful, confused, angry and many more ranges of emotions, she said. This can include repeating vulgar words, she noted.

Interpreting Marshallese also depends on body language, Davis said. Marshallese in court answer most of the time with head nods, she said.

"You want to inflect the tone of the speaker without becoming part of the story," Yancey concluded.

Harper holds hearings for misdemeanor cases Monday through Thursday in the morning, he said.

The Springdale court staff and Springdale police officers schedule defendants for the court date that best suits them.

Harper also relies on telephone interpretation in cases where the defendant speaks any language other than English, Spanish or Marshallese.

"It's just so much harder on the phone," Harper said. "I have to hold my phone up to the microphone, so the defendant can hear the interpreter."

One man faced Harper with two drunk driving arrests. Harper pointed out the first charge could enhance the sentence for the second. The man wanted to plead guilty, but Harper wanted to make sure the defendant understood.

When a defendant pleads guilty, he must sign a waiver saying he understands what his plea means.

Davis read the entire waiver step by step to the man in Marshallese before he signed it.

Harper noted the case took longer than others Wednesday morning but said it would have taken another 25 minutes if it had been translated by phone.

Harper said he would have read the waiver step by step for the interpreter, who would then have repeated it in Marshallese.

Davis interpreted for 12 Marshallese residents Wednesday, with cases ranging from driving while intoxicated and driving with a suspended license to failure to appear and pay fines.

Davis described herself as "born and bred" in the Marshall Islands, but speaking English while she lived there. She's a caretaker and mother of three, who was looking for a part-time job when a Marshallese friend asked Davis to interpret when the friend went to court.

She realized that day the Marshallese people in Northwest Arkansas needed an interpreter.

One man faced an alcohol charge, Davis said. He told the judge, in essence, "I work, work, work, then I go home and pass out," Davis related. "But he meant he went to sleep, not passed out from drinking too much alcohol. He almost got thrown in jail," she said.

Davis said she still gets nervous when interpreting in court -- even after four years and several previous years for the Rogers School District -- and she's still learning.

One defendant Wednesday did not come to the front when his name was called and seemed confused even when Harper asked his questions through Davis.

"We figured out that man was hard of hearing," Davis said.

Harper from the bench spoke louder, and Davis spoke directly into his ear. The man was in court related to his fourth public intoxication incident.

"Enough is enough, you're going to hurt yourself," Harper said.