Legal Aid in the News: Why an Arkansas town could provide a grim road map for America if car repos blow up. 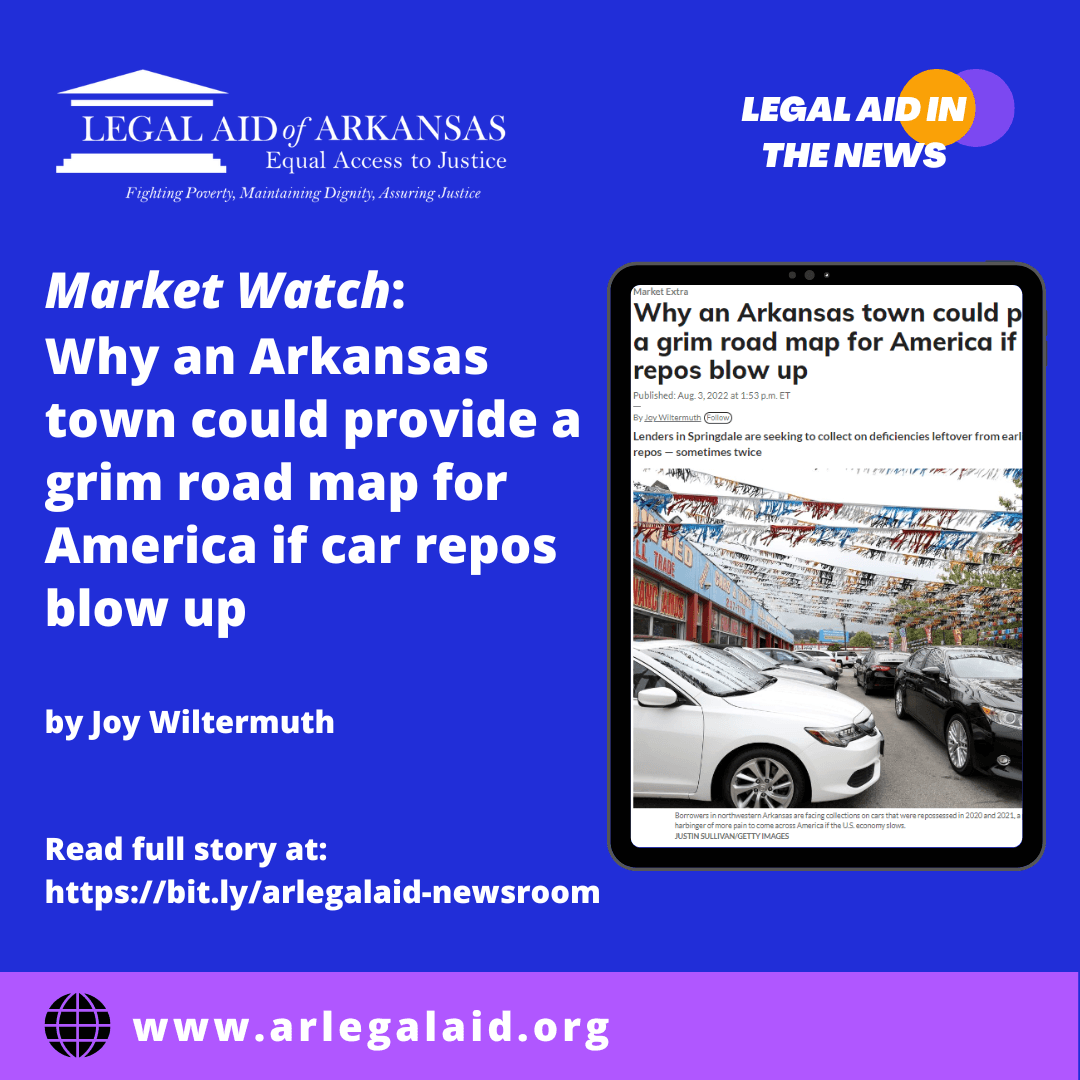 As recession worries loom over America, a debt crisis already bearing down on wage workers in northwest Arkansas could foreshadow bigger problem for a nation on high alert for a flood of car repossessions.

Springdale, Ark., a town of almost 90,000 residents in the Ozark Mountains, has been facing the aftershocks of some of the pandemic’s darkest days: lenders who come knocking to collect leftover debt on repossessed automobiles.

MarketWatch first wrote about essential workers in the area falling behind on auto loans, and facing the repo man in the early months of the COVID crisis, some after contracting the virus before vaccines were available.

When checking back for a series on what’s fueling the pandemic boom in auto financing, MarketWatch found borrowers in Springdale facing fresh collection attempts, in the form of lawsuits, from an older wave of repossessions from 2020 and 2021.

The trend matters because many U.S. households have been squeezed by inflation that remains near a four-decade high. Beyond the Ozarks, near-record car prices have spurred worries of a potentially bigger auto debt crisis unfolding, one that could cause the latest boom in high-risk pandemic loans to unravel.

“Keep in mind, we are working with people who live in poverty,” said Mallory Sanders, a lawyer at Legal Aid of Arkansas in Springdale, about clients now seeking her help.

Most are reeling from recent lawsuits filed by lenders looking to recoup deficiencies, or the balance of loans leftover on repossessed vehicles. Many are new immigrants working in local poultry factories through the COVID crisis.

“There is no doubt folks took out loans they couldn’t afford to drive a vehicle to get to work, or to take kids to school,” Sanders said. “The only way to function in this part of the country is to have a car.”

Although, she also called the bulk of recent collections cases hitting her desk as the result of “predatory” loan practices, mostly from “Buy-Here, Pay-Here” car dealers who can leave wage workers in a debt spiral.

“These car contracts are not for these borrowers to get a car,” Sanders said. “They are designed for a default.”

Also, there’s an upside for lenders not getting their monthly car payment, she said, because they “can get 25% of a paycheck” by garnishing a borrower’s wages, and then resell the vehicle to another borrower.

Many borrowers Sanders has worked with lately took out auto contracts in English, signing documents despite a language barrier, she said, while a common thread has been a willingness to take on car debt with the hope of getting ahead.

Sparse public transport options have exacerbated inequality in American for decades, resulting in a 75% increase in the amount borrowers owed on their cars between 2009 and 2019, according to a study from consumer advocacy group U.S. PIRG, which was released about a year before the pandemic.

The study also called for an end to discriminatory loan markups, predatory lending practices and abusive car repossession tactics, noting that such tactics leave lower-income households vulnerable in a downturn.

Evidence of intensifying auto-debt woes can be found from California to Florida in complaints filed with the Consumer Financial Protection Bureau. A borrower from Alabama in May requested help from the consumer watchdog, claiming that interest based on the wrong amount received from the sale of a surrendered vehicle was being charged. “I only surrendered the vehicle due to the pandemic that swept the entire world,” the borrower wrote.

Another asked for help with a $7,700 negative balance being reported on a surrendered vehicle that the borrower claims was sold for $5,600.

The boom in auto lending over the last decade shifted into a higher gear during the pandemic, as vehicle shortages led to skyrocketing car prices that only were temporarily offset by government stimulus checks.

In some instances, Sanders said a lender reached an agreement with a borrower to not pursue a deficiency after a repossession, but that was after the customer agreed to purchase another vehicle, and to keep making payments.

“It makes zero logical sense,” Sanders said. “They can’t make the payments on the old car, but they get a new loan. When the borrower defaults — because they will — they will be pursued on both deficiencies.”

Lenders in Arkansas can pursue a borrower for up to five years on an outstanding balance left on their loans. “The lawsuits come with a lag,” Sanders said of the cases now rolling into her office.

While it has become common practice for lenders to roll over the unpaid balance of a previous loan into a new one, the “trade-in treadmill” leaves consumers deeper in unsustainable debt, Ed Mierzwinski, a senior director for the Federal Consumer Program at U.S. PIRG, told MarketWatch.

Even so, Buy-Here, Pay-Here dealers “often have a different business model,” he said, adding that it has become a well-established industry practice to lend to consumers with poorer credit histories in hopes they’ll fall behind on payments, so the car can be repossessed and resold.

The idea of hooking a defaulted borrower into a second car loan, “then seeking to double-down and collect unpaid loan deficiencies on both loans, may be a new variant on the subprime car loan virus,” Mierzwinski said.